Last year in December I set myself a TBR of 16 books to read in 2017. Today I’m checking up on it and seeing how well I’ve done! These are the books I wanted to read:

1. The Hammer of Thor by Rick Riordan ( Magnus Chase and The Gods of Asgard #2)

I’m happy to say that I’ve already read the first book on the list! I picked this one up in February and I really enjoyed it. I laughed out loud several times. This is rare for me with books, but Rick Riordan always succeeds to make me laugh! I ended up giving it four out of five stars. I would recommend it!

2. The Shatter me series by Tahereh Mafi

I finished this series back in January and I must say I loved it! Especially Warner! Ignite me is one of my favourite books of 2017 so far! I absolutely adored it! I would most highly recommend it and I’m so excited the story will continue with another book coming out next year!

3. The Lunar Chronicles by Marissa Meyer

This is another series I absolutely adore, even more than the Shatter me series! I finished all the main books in the series, concluding with Winter in April. I haven’t yet read Stars above nor have I read Fairest. I really want to read the former, but I have no interest in the latter. I hate Levana with a passion and I definitely don’t want to read her story. I’ve heard it’s kind of twisted. I know there are some people who love to read a villain’s back story, but I’m not one of them in this case. I gave all the main books five out of five stars. Cress and Winter are also on the list of my favourite books of 2017 so far!

I’ve read Throne of Glass, Crown of Midnight and Heir of Fire. I really liked Throne of Glass, I ended up giving it four out of five stars. CoM and HoF I didn’t really like unfortunately. I was very disappointed in both of these books. I found them really boring. I wasn’t invested in the story anymore and I had to force myself to read. Now I don’t know if I want to continue. They don’t have Queen of Shadows in my local library. If they did I’d consider continuing, but they don’t and I don’t want to spend money on the rest of the books when I already know they wont wow me. So for now I’m not going to continue the series. 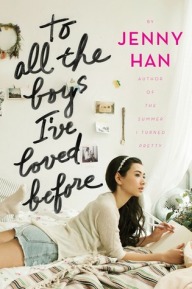 5. To All The Boys I’ve Loved Before by Jenny Han

I picked the first two books up in April and I enjoyed them, but way less than I expected. These books have a lot of hype, but I didn’t love them. I gave the first book three and the second book four out of five stars. I don’t ship Peter and Lara Jean, so I think that why I didn’t enjoy this as much. I did love Margot, Lara Jean’s sister. She was so relatable, we seriously are almost the same. Needless to say I was disappointed when she left on page 10 or so. I don’t know yet if I’ll pick up the third book in the series.

6. A Court of Thorns and Roses Series by Sarah J. Maas

I’m so glad I picked up this series. I absolutely adore it! It is my favourite series of 2017! I can’t explain how much I love it! I gave all the books five out five stars! OBVIOUSLY! I’d recommend it to everyone! It is amazing! I wrote an extremely long review for the series, so if you want to know my thoughts in more detail, definitely go check it out! 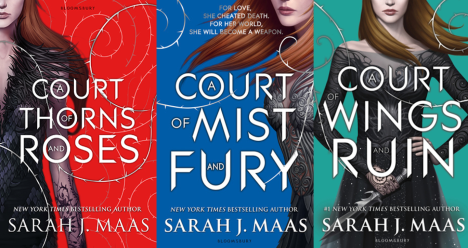 7. the Firebird trilogy by Claudia Gray

I’ve read the first two books in this series and I’ve enjoyed both of them. I’m not going to say I adored them, because I didn’t, but they were enjoyable. I like the whole different dimensions concept and in the second book it developed more. I liked that. I want to pick 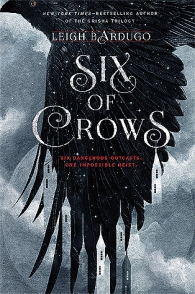 up the concluding novel somewhere in the next six months!

8. Six of Crows by Leigh Bardugo

I read this book at the end of March and I really enjoyed it. The main characters were very diverse, I especially liked Inej. The world development was good and the plot was very thrilling. Once the reached the Ice Court I was constantly on the edge of my seat and I loved gradually finding out how their plan worked! I gave it five out of five stars and I’m looking forward to Crooked Kingdom! I’ll pick that one up very soon.

9. Simon VS The Homo Sapiens Agenda by Becky Albertalli

I adore this book! It is absolutely amazing! I’ve already re-read it because I loved it so much. The first time was in January and the second was in May. Both times I loved it! Both times, I read it in one sitting. I just can’t put this book down once I start. The romance is so adorable and shippable! It’s also very relatable. It handles with topics as diversity magnificently! I would highly recommend this book.

10. Not if I see you first by Eric Lindstrom

I read this book at the end of February and it hit me more than I expected. It made me cry and it me my laugh, which is always a good sign. I liked the main character Parker, although I must admit she was very self-involved at times. It was interesting to see how being blind changed her every day life. I also liked how developed the side characters were. There aren’t any descriptions of them and all you get to know is through the dialogue. Still there were well flushed out and I really liked that. I’d recommend this book.

It wasn’t planned at all, because I’m just going over these books in the order I wrote them in my original post, but I’ve read all the books above and none of the books below. It’s just a coincidence! Anyway although I haven’t picked it up yet, I’m still really interested in reading Illuminae. The concept still speaks to me even though the hype has now died down. I still want to pick it up! I hope I get to it in the next six months!

12. Whisper to me by Nick Lake

I’m sad to say I’ve lost interest in this book. I don’t even really know what it’s about anymore. I don’t think I’ll read. It’s a ‘It’s not you, it’s me’ case with this book. I’m sure it’s great, it just doesn’t spark my interest anymore. Oh well.

I am really interested in this book though. I’ve been on the look out for it in my local library, but I don’t think they have it. As much as I want to read this book, I think It’ll take me a while until I get to it. Since they don’t have it in my library I’ll have to buy it and there are other books higher on my wish list. We’ll see when I’ll be able to get it.

14. An Ember in the Ashes by Sabaa Tahir

This is another book I’ve lost interest in. I took it home from the library once, but I just couldn’t bring myself to pick it up. It again has nothing to do with the book, rather with me and my changed reading interests. In school I study Ancient Greek and Latin and I’m really interested in that time period. Taking these lessons, I’ve learned a lot about the culture and I think another reason for me failing to pick this book up is that I’m scared the culture will be all wrong. It says it’s loosely based on the Roman Empire and I read that as ‘the author took inspiration from the Roman Empire, but then completely changed it. So were calling it loosely based.’ Maybe this is stupid, but realistically I don’t think I’ll read this book.

15. Since you’ve been gone by Morgan Matson

I’m still very interested in reading this book, but it’s kind of the same scenario as with Highly Illogical Behaviour by John Corey Whaley. They don’t have the book in my local library and as much as I want to read it, there are books that are higher on my wish list. We’ll see when I’ll get to it!

16. The rest of us just live here by Patrick Ness

Lastly, I also put this book on my 2017 TBR. Again, I haven’t read it yet. With this one I’m not sure what I want to do. I’m still interested in the concept, but I’ve heard a lot of meh reviews and none that are praising. I guess it must be kind of boring. I don’t know yet what I want to do with it yet.

So that’s it! Those are all the books on my 2017 TBR and which ones I’ve read so far! Have you read any of these? What did you think? See you next time!